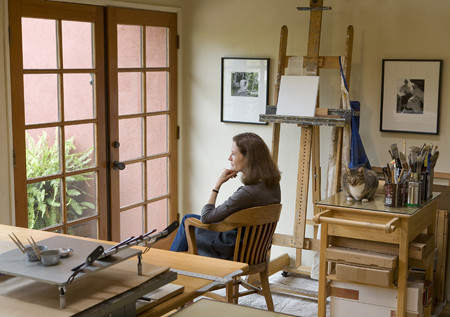 With over 200 group and solo exhibitions, her art has been widely collected, reviewed, and published in artist catalogs and books, including IMAGERY: Art for Wine by Bob Nugent, foreword by Donald Kuspit.

Debra McKillop is a professional studio artist and teacher with a MFA from California State University at Northridge and undergraduate work at University of California Los Angeles, University of California at Santa Barbara, Pasadena Art Center, and in Mexico. McKillop has lived and worked in Ventura and Santa Barbara counties, and in New York City. Since 1986 she has taught studio art at Ventura College and from 2001 to 2005 taught at Santa Barbara City College.  In 1995 she created a class in gallery and museum studies entitled Gallery Technology and Management, which she taught at Ventura College for 12 years.

Mentored by curators Josine Ianco Starrels (1995-6) and William McEnroe, McKillop has 25 years of experience in independent curation.  She was the director/curator of Ventura College Art Galleries (1995-98) and has juried art for numerous galleries, museums and arts commissions throughout Southern California. McKillop has served as both public arts commissioner and as a member of the Municipal Arts and Acquisitions Committee for the City of Ventura.

McKillop has exhibited her work throughout California, the United States and in Europe.  She has received numerous scholarships, grants and awards, including the Pasadena Art Center College of Design (scholarship), Brooks Institute (partial scholarship),  a Ventura College foundation grant, art awards from the Bank of America and Hallmark (the KCAI Summer Scholarship and the Santa Barbara Contemporary Arts Forum(CAF) exhibition award.  Her art is included in the Benziger Family Winery art collection and the City of San Buenaventura Municipal Art Collection.

An avid traveler, McKillop has explored the arts throughout North America and Europe. While studying art through the University of Arizona in Guadalajara, her host was Diego Rivera’s granddaughter. McKillop was an artist-in-residence at the Imagery Gallery in Glen Ellen, California (2002) and in France (2001-2002).

McKillop participated in an National Endowment for the Arts film project, The Making of The Last Supper Sculpture. As Mr. Szukalski’s project director, she is featured in a segment titled The Source: Albert Szukalski Interview with Debra McKillop.  She is the subject of two interviews by Focus on the Masters founder, Donna Granata – City Council Update: A Conversation with Debra McKillop (CAPS TV, April 1999) and as a FOTM feature artist .

Debra McKillop’s documentation took place in 2005 and was sponsored by Dick and Betsy Chess.  The FOTM Archive contains extensive information about this artist.